Mark’s Gospel tells us how the disciples prepared the Passover for Jesus. If possible, Jewish people like to celebrate this occasion in Jerusalem. Jesus had entered Jerusalem riding on a donkey and being greeted by the people shouting ‘Hosanna’. Now it was time for Jesus and his disciples to prepare for the feast of Passover. The disciples would have gathered the food, the lamb, bitter herbs, salt water, unleavened bread and wine.

During the Last Supper the events of the Exodus would have been present in the memories of Jesus and his friends; they would have recalled how God led his people to freedom. Jesus would have celebrated Passover every year of his life, but this time it was different. He introduced something quite new as he blessed, broke and passed the unleavened bread to everyone, telling them it was his body and then the cup of wine saying it was his blood and that it would be shed, be sacrificed, for everyone. He asked that they repeat his actions in memory of him.

Answer these questions in your book or on the blog.

The Last Supper was the first Eucharist. Every time the Eucharist is celebrated, Christians are keeping the memory of Jesus alive. The Eucharist is a memorial of Christ’s sacrifice on the Cross and makes that present and real, in a similar way to how for the Jewish people the events of their freedom from Egypt are made present to them each time they celebrate the Passover. During the part of the Mass called the liturgy of the Eucharist, in the Eucharistic prayer, the priest holds the host and says the words:

“Take this, all of you, and eat of it: for this is my body which will be given up for you.”

and when he holds the chalice he says:

“Take this, all of you, and drink from it: for this is the chalice of my blood, the blood of the new and eternal covenant, which will be poured out for you and for many for the forgiveness of sins. Do this in memory of me.” 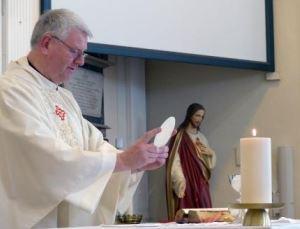 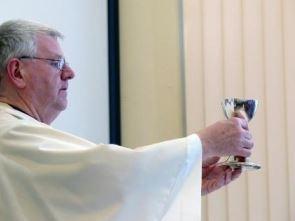 At that moment the memory of Jesus’ actions at the Last Supper are called to mind and made present and real for Christians. These are called the words of consecration. (Consecration means made holy.)
Catholics believe that at this point in the Mass, through the power of the Holy Spirit the bread becomes truly the body of Christ and the wine the blood of Christ. The server will ring a bell as the priest holds ups (elevates) the host and then the chalice. People will look up and make an act of faith and pray in their hearts something like ‘My Lord and my
God’, affirming that they truly believe in the words of Jesus, when he said at the Last Supper ‘this is my body, this is my blood.’ This is the real presence of Christ.

1 What is the Eucharist a memorial or memory of?
2  Where do the words the priest says come from?
3  What happens to the bread and wine?
4  What do you think is meant by the real presence of Jesus?
5 Why do you think this part of the Mass is important to Catholics?