Make sure you know them, and get an adult to test you on Friday.

1) Do ‘look/say/cover/write/check’ to practise each word 2) Note your mistakes and re-write. You could use coloured writing, pyramid writing and other strategies you have learned to help you. 3) Write each word in a different sentence. Make your sentences as interesting as you can. Avoid starting each sentence in the same way.

Wow, some of your descriptions of your island last week were fantastic.. I feel like I have visited your islands because you described them in so much detail - well done!

Click on the link below to begin this week's tasks.

LEARNING FOCUS 3:  God has forgiven you.

God is always loving and forgiving and here is a story that Jesus told that shows this.  Read the story of the Prodigal son God Story 3 page 102, Luke 15: 11-32.

A man had two sons. The younger became impatient of living at home on the farm. He wanted to set out into the wide world and seek his fortune. He said to his father, “Father, give me my share of the money from the farm that would come to me when you die.”

His father was very sad to hear this, but he loved his son, so he sold off half the farm and gave him the money.

The older brother was furious, but the younger son was delighted. He had never had so much money in his life! At once he set off for a far country where nobody would know him and his riches would impress everyone. And they were impressed! He soon found friends to help him to spend his money. He really enjoyed himself. He did anything he wanted. There would be plenty of time later to get a job, and come home to his family a very wealthy man.

But a famine spread quickly over the country. Crops failed and there was very little work of any sort to be had. His new friends could not even be bothered to offer him a meal. The only job he could find was working on the farm of a Gentile – feeding pigs! He was so hungry that he would have been glad to eat the pigs’ food himself. At last he came to his senses.

“Even my father’s servants have more food than they want, and here am I dying of hunger! I will leave this place and go to my father and say: “Father, I have sinned against heaven and against you; I don’t deserve to be called your son; treat me as one of your paid servants.” So he left the place and went back to his father.

His father had been watching out, hoping his son would come home. While he was still a long way off, his father saw him, barefoot, ragged and dirty and so very pale and thin. He ran to the boy and hugged and kissed him.

The son began his speech, but his father interrupted him, calling to the servants, “Quick! Bring out the best robe and put it on him; put a ring on his finger and sandals on his feet. Bring the calf we have been fattening and prepare a feast. I want to celebrate, because this son of mine was dead and has come back to life; he was lost and is found.” 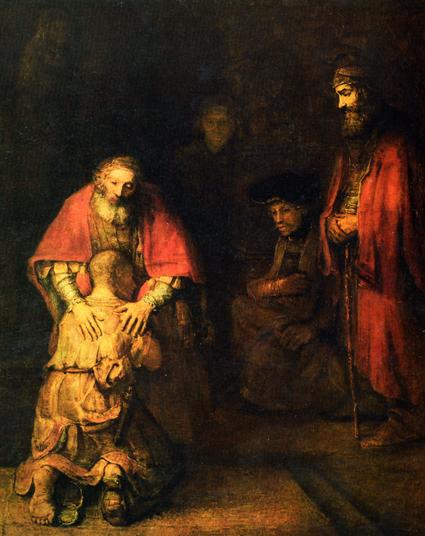 What is happening in the picture and what might the characters be thinking?

God is full of mercy and compassion.  God always loves you but does not like sin.

Imagine you are the son or the father and tell your story, giving reasons for your thoughts and actions.

Unfortunately not the ones with chocolate chips.

Some cookies are necessary in order to make this website function correctly. These are set by default and whilst you can block or delete them by changing your browser settings, some functionality such as being able to log in to the website will not work if you do this. The necessary cookies set on this website are as follows:

Cookies that are not necessary to make the website work, but which enable additional functionality, can also be set. By default these cookies are disabled, but you can choose to enable them below: